Austin’s soil composition is primarily that of a heavy clay. Clay soils have the unique property of absorbing and releasing water slowly. This phenomenon is primarily caused by the size of the pore space between the soil particles, leaving little room for gases that must be present for respiration. Without respiration, any plant will die. Chlorophyll is a green pigment that makes it possible for plants to convert carbon dioxide and water into oxygen and glucose. During this process chlorophyll produces energy which powers growth and development. This also gives plants their distinctive green color. 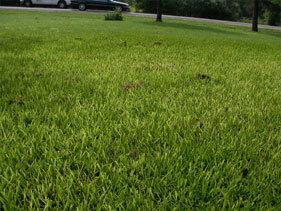 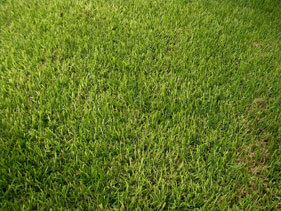 Technically, the chemical reaction of photosynthesis uses an equal number of carbon dioxide and water molecules to create the same number of oxygen and glucose molecules. This gas exchange takes place on the bottom sides of the foliage. The reaction only occurs if both chlorophyll and sunlight are present. As a photoreceptor, chlorophyll is sensitive to light of a certain spectrum that’s emitted by sunlight. This means it can capture the energy of visible light, mostly red and blue. Then it reflects the unneeded green light, giving plants their color. Respiration is the process in which plants use this stored energy. In this process, the plant actually takes in small amounts of oxygen and expels small amounts of carbon dioxide. This gas exchange takes place in the root zone and is necessary for this process to occur.

A secondary problem associated with soggy/compacted soils, is the lack of aerobic bacteria. As the name suggests, this bacterium needs oxygen to survive. Aerobic bacteria is what actually breaks down organic matter, in the soil, releasing nitrogen. Aerobic bacteria feeds from carbon and releases nitrogen in the process. Technically plants produce their own food during photosynthesis. The nitrogen that is released during decomposition of organic matter is only one of the materials used in this process.

1. Will adding iron or ironite make my lawn green?

No. If your lawn is located in central Texas, most likely you have an over-abundance of iron in the soil. If your problem is caused by too much rain, poor drainage or over-irrigation, iron will not fix yellowing.

2. Will fertilization help my lawn?

No. If you add fertilizer to saturated soils, and there is enough aerobic bacteria to break down the carbon and release nitrogen; you risk a very severe fungus attack.