While there are over 200 species of fleas, the main troublemaker for pets is the cat flea. Happy to feed on anyone, they most likely choose a pet, whose fur provides warm camouflage for their breeding ground. The flea life cycle has four stages: eggs, larvae, pupae, and adults. Female fleas lay up to 50 eggs a day, starting a life cycle that can be completed in as little as three weeks, depending on temperature and humidity. The eggs hatch into larvae, which feed on “flea dirt,” excrement of partially digested blood. Larvae grow and molt twice, then spin cocoons, where they grow to pupae and then adults. The adult remains in the cocoon until vibrations show a host is nearby. This waiting can extend the life cycle. It also explains why large numbers of fleas often are seen when an empty building is reoccupied. Adults emerge and attach to a host to feed and breed, beginning the cycle all over again. Itching from fleas is because of their bites and their crawling over the skin.

Other Flea Bite Problems And Their Symptoms Include:

Advantage and Frontline Top Spot are supplied in a little plastic squeeze tubes. Select the size that matches your pet’s weight and apply the entire contents directly onto the skin, once a month.

Fleas and butterflies have the same life cycle: egg, caterpillar, cocoon, adult. The adult female lives its three-week life on the dog, sucking blood two or three times and laying twenty or thirty eggs each day. Growth from egg to adult takes about three weeks. This means that by the time you notice fleas, there will already be enormous numbers of eggs, caterpillars, and cocoons on your carpet. Flea pupae, protected in their cocoons, are invincible. Even if you vacuum and fumigate, they will continue to hatch and most of them will bite somebody before they die. Use Revolution, Advantage, or Frontline for your pets. Fleas will hatch, jump on the pet and quickly die.

Washing the pet’s bedding regularly and vacuuming frequently also helps keep the flea population down. The vacuum bag should be changed after vacuuming and the used one burned, if possible, to prevent it from serving as a flea incubator. Cats who don’t go outside have the least risk of getting fleas. 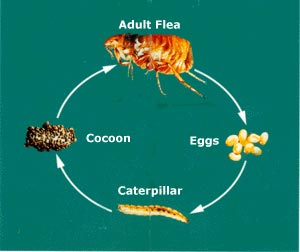 A tick has a one-piece body. The harpoon-like barbs of its mouth are attached to a host for feeding. Crablike legs and a sticky secretion help hold the tick to the host. When attempting to remove a tick, to prevent the mouth part from coming off and remaining embedded in the skin, grasp the mouth close to the skin with tweezers and pull gently. (See “Preventing Tick-Borne Disease”).

Ticks are not insects like fleas, but arachnids like mites, spiders, and scorpions. They have a four-stage life cycle, illustrated in a 794K PDF file: eggs, larvae, nymphs, and adults. Adult females of some species lay about 100 eggs at a time. Others lay 3,000 to 6,000 eggs per batch. Six-legged larvae hatch from the eggs. After at least one blood meal, the larvae molt into eight-legged nymphs–in some species, more than once. Finally, the nymphs molt into adult males or females, also with eight legs. Depending on its species, a tick may take less than a year or up to several years to go through its four-stage life cycle. While ticks need a blood meal at each stage after hatching, some species can survive years without feeding.

The United States has about 200 tick species. Habitats include woods, beach grass, lawns, forests, and even urban areas.

Ticks May Carry Various Infectious Organisms That Can Transmit Diseases To Cats And Dogs, Including The Following (listed With Possible Symptoms):

In June 1992, USDA licensed a vaccine to prevent Lyme disease in dogs. This followed a conditional license in 1990.

According to USDA’s Espeseth, “There were early concerns about disease related to abnormal immune responses. But we’ve never seen this. Nor have we seen such responses with extensive safety testing before the final licensing.”

In most cases, the immunity lasts at least five or six months, Espeseth says. “The recommendations are for dogs actively in the field, subject to exposure. For dogs in apartments or those that seldom get out or live in regions where Lyme disease isn’t prevalent, it’s probably not worthwhile.”

To reduce the population of deer ticks, which transmit Lyme and other diseases and often attach to the deer mouse, EPA has licensed a product named Damminix. It comprises tubes stuffed with cotton balls treated with the pesticide permethrin.

“The cotton balls mimic the nesting material for the deer mouse,” says George La Rocca, a product manager in EPA’s Office of Pesticide Programs. The label, he says, directs users to place the tubes containing the cotton balls in outdoor areas inhabited by mice, such as brush-covered and wooded areas. “It kills and repels ticks on the mice. It’s not meant to eradicate Lyme disease, but to reduce its incidence.”

Debugging Your Home in Austin TX

To protect pets from the discomfort and illness caused by fleas and ticks, it’s important to rid the pets of the pests. It’s also important to treat a pet’s environment to prevent or reduce the incidence of reinfestation, says FDA’s Larkins.

Products to control these pests are not risk-free, however. (See “Improving Safety “)

Approved or registered products must warn users about the risks the product poses and give directions for safest use. Proband’s label, for example, warns that the product is not for greyhounds, who are sensitive to the insecticide it contains, an organic phosphate. Also, some products should not be used together or when a pet is taking certain medicines. Call us for advice. 512-892-0344

EPA product manager Rick Keigwin agrees. As pesticides should kill pests, they are inherently toxic; he says. “Some products pose some risks, but they also offer significant benefits. We balance the risks with the benefits.”

Virtually hundreds of pesticides and repellents are approved or licensed to control fleas and ticks on cats and dogs or in their environment.

Larkins advises, “Follow directions for use carefully, even with over-the-counter products. If you don’t understand the directions or have questions, talk to your veterinarian.” We highly recommend that you call a professional service trained in the interaction of different products. They will have products not available to the consumer. Of course, we recommend Real Green Services. They have the knowledge, products, and programs to keep your lawn free of these pesky critters.

Pesticides and repellents to protect cats and dogs from fleas and ticks have risks and benefits. Concerned over recent reports of adverse effects from such products, the Environmental Protection Agency, in cooperation with industry, has developed guidance for labeling changes to promote proper use.

The effort, coordinated by EPA policy analyst Janet Whitehurst, began early in 1994 when she learned that in just 18 months, EPA had received 853 reports of adverse effects, including 148 animal deaths and 58 reports of illness in humans. Most reports involved cats, which are more sensitive than dogs. 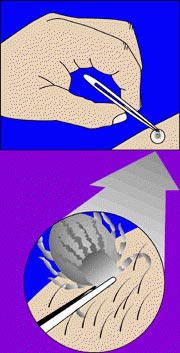 If your dog is outside regularly, ask the veterinarian about the Lyme disease vaccine. (There’s no vaccine for cats yet.) Watch for itching, pain, appetite loss, lethargy, fever, swollen joints, or lameness. If you suspect a tick-borne disease, see the veterinarian pronto. With early diagnosis, antibiotics work.

The illustration at right shows proper tick removal procedures. Using fine-point tweezers, grasp the tick as close to the skin as possible and pull gently. Make sure you’ve cleaned your hands, the bite site, and the tweezers with disinfectant. Wear latex gloves.

In Addition, Take These Steps To Protect Yourself When In Woods And Grasslands:

Fleas and ticks transmit diseases to people and pets.

Lyme disease is by far the most often reported tick-borne disease in humans in the United States: 13,083 cases in 1994, up from 8,257 in 1993. Most reports came from the Northeast and North Central regions of the country. Symptoms include fatigue, chills and fever, headache, muscle and joint pain, swollen lymph nodes, and a red, circular skin rash. (See “Getting Lyme Disease to Take a Hike,” in the June 1994 FDA Consumer.)

The next most prevalent disease from ticks is Rocky Mountain spotted fever, characterized by fever, headache, rash, and nausea or vomiting. It affects over 500 people each year, according to the national Centers for Disease Control and Prevention.

CDC received reports of 415 cases of human monocytotropic ehrlichiosis, a disease also transmitted by ticks, since it was identified in 1986. It is like Rocky Mountain spotted fever, but usually without the rash. In 1994, scientists identified another similar disease, human granulocytic ehrlichiosis, or HGE. About 170 cases have been reported.

The organism that causes the tick-borne disease babesiosis infects red blood cells, which burst and die, resulting in hemolytic anemia. Patients develop a malaria-like fever, chills, sweats, muscle aches, nausea, and vomiting; those with no spleen are at particular risk of developing severe disease. The reported incidence of babesiosis is about one-tenth that of Lyme disease, or even less, according to Sam Telford, Ph.D., a lecturer on tropical public health with the Harvard School of Public Health.

Lyme disease, HGE, and babesiosis are all transmitted by the deer tick. Ticks have been found to have any two of those disease-causing organisms. “I believe it’s only a matter of time before we find a tick with all three,” Telford says. The lone star tick transmits human monocytotropic ehrlichiosis.

Many exposed people never develop the diseases. Roughly 5 percent of coastal Massachusetts’ population has antibodies against babesiosis, Telford says. “We believe it’s about the same for ehrlichiosis. For Lyme disease, it’s maybe three times that.”

Symptoms of bubonic plague include fever, headache, vague discomfort, and very painful, swollen lymph nodes near the infection site. Septicemic plague is more serious because the bloodstream is infected, as is pneumonic plague, with its overwhelming pneumonia. Antibiotics are used for treatment. A plague vaccine is available for special groups at very high risk.

Early diagnosis and treatment give humans the best chance of recovery from these and other fleas- or tick-transmitted diseases.

Call us, we have the latest technology to control these pesky critters.