If you deal with shredded hardwood mulch in a landscape, sooner or later you’re going to have slime mold. It normally starts as a wet-yellow or wet-orange blob on the top of a mulched bed, then hardens and turns tan and becomes a brown pile of dust. While the wet stage lasts 24-36 hours, the hardened, brown-spore stage can last a month. The slime mold is fried and eaten by natives of Veracruz, Mexico, called “caca de luna”. In Austin it’s almost always associated with shredded hardwood mulches. It gets energy from organic matter below the soil line rather than from the sun, like other plants. If a fungus feeds on living organic matter, it is called parasitic. If it feeds on non-living organic matter, it’s called saprophytic. Slime mold shows high levels of organic matter trying to do something and you don’t need to control it. If you do, you can control it by flipping it over and soaking the area with a fungicide like Consan. Once it’s dried and hard, forget about spraying it with anything. Another saprophytic fungus we are all very familiar with is slime mold. It shows up as a little area of grass that looks as if someone coated the blades with oil and then sprinkled cigarette ashes or salt and pepper on the blades. Again, Consan brushed on the blades in that area will help to suppress the mold, though it will go away on its own. 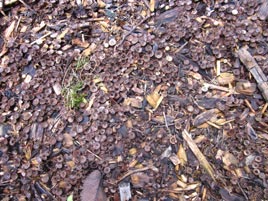 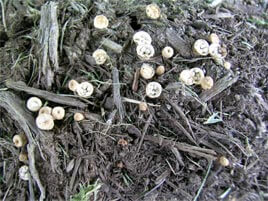