How To Prune A Tree Or Shrub Austin, TX

How To Prune A Tree Or Shrub Austin TX

More on how and when to prune a Live Oak. Pruning is one of the most important cultural practices for maintaining woody plants, including ornamental trees, shrubs, fruits, and nuts. It involves art in making the pruning cuts properly and science in knowing how and when to prune. Sometimes you want to train or direct the growth of plants into a particular form or a specified space, like a formal hedge, or you may want to prune mature plants to control their size and shape, as in the case of fruit trees that are pruned low to the ground to aid picking or hedge plants pruned at a particular height. For fruiting plants, pruning plays an important role in improving overall fruit quality, primarily by increasing light penetration into the tree. Proper pruning requires an understanding of how plants respond to various pruning cuts. The principles and guidelines in this publication will help you with pruning techniques.

You can partly determine the characteristic shape and size of a woody plant and its response to pruning by the plant’s natural pattern of shoot growth. When a seed germinates and grows, only one growing point exists, the apex or terminal bud. When a terminal bud begins growing after being dormant, it leaves a bud scale scar on the branch. You can use the scars to determine the age of a limb or tree by counting them. As the new shoot elongates, nodes are formed. A node is the area on the shoot where a leaf is attached. One to three lateral buds are produced at each of these nodes. Growth of lateral buds is directed by the terminal bud, which produces the hormone auxin. Auxin moves down in the shoot from the shoot apex and inhibits the growth and development of lateral buds. This phenomenon is called apical dominance. The intensity of apical dominance varies from one plant species to another. Some plants suppress the growth of their lateral buds until the second growing season; others develop both lateral shoots and terminal buds during the first growing season. Apical dominance influences not only the number of shoot-forming lateral buds and the lengths of lateral shoots formed but also the angle at which the shoots emerge from the main limb.

The orientation of a limb or shoot along the main branch has a major influence on growth by its effect on apical dominance. Because auxin moves downward in the shoot toward the Earth’s center, apical dominance is strongest in vertical or upright shoots or limbs. In vertical limbs, vigorous shoot growth occurs near the terminal bud with lateral shoots becoming sparser with increasing distance from the apex. On the other hand, orientation of lateral branches at 45° to 60° angles from the vertical or main shoot reduces the vigor of shoot growth near the apex and increases the number and length of laterals along the limb further from the apex. On horizontal limbs, apical dominance is totally lost. Without apical dominance to control their growth, lateral buds on the upper side of horizontal limbs develop into upright shoots called water sprouts. As they develop, water sprouts show very strong apical dominance. Water sprouts are a common problem on the upper surface of flat limbs in fruit trees and are removed by pruning. 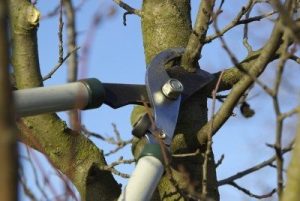 Pruning is an invigorating process. By removing the apex, pruning temporarily destroys apical dominance and stimulates the growth of lateral buds into shoots. Pruning also reduces the size of the above-ground portion of the plant in relation to the root system, and as a result, the undisturbed root system services a smaller number of shoots and buds. The relative uptake of water and nutrients by the remaining shoots and buds increases, and regrowth occurs. Generally, the more severe the pruning the greater the regrowth. In essence, the plant is growing in an attempt to restore a balance between the top and the root system.

Pruning generally stimulates regrowth near the cut. Vigorous shoot growth will usually occur in 6 to 8 inches of the pruning cut. This is particularly true for vertical limbs that have been pruned. However, growth on limbs having a 45° to 60° angle from the vertical will develop farther away from the cut. Pruning can also indirectly stimulate growth of lateral shoots by allowing more light to penetrate the canopy of the plant. Pruning a young plant will stimulate vigorous shoot growth and will delay the development of flowers and fruit. The length of the delay will depend on the species pruned and the severity of the pruning.

There are two basic types of pruning cuts, heading and thinning. Each results in a different growth response and has specific uses. Heading removes the terminal portion of shoots or limbs. By removing apical dominance, heading stimulates growth near the cut. It also is the most invigorating type of pruning cut, resulting in thick compact growth and a loss of natural form, as in the case of a formally pruned hedge. Sometimes ornamental shrubs along a foundation overgrow their planting space and are rejuvenated by heading to within 12 inches of ground level. Many broadleaf shrubs such as burford holly, ligustrum, abelia and crape myrtle tolerate this type of pruning. Other types of heading are topping, dehorning, hedging and clipping. Thinning, on the other hand, removes an entire shoot or limb to its point of origin from the main branch or lateral. Some shoot tips are left undistributed, so apical dominance is maintained. As a result, new growth occurs at the undisturbed shoot tips while lateral bud development and regrowth is suppressed.

Thinning is generally the least invigorating type of pruning cut and provides a more natural growth form of plants. Important in maintenance pruning, thinning cuts are used to shorten limbs, to improve light penetration into plants and to direct the growth of shoots or limbs. Drop-crotching, a form of thinning used to reduce the size of large trees, involves the removal of a main branch by cutting it back to a large, lateral branch. The cut through the main branch is made parallel to the angle of the remaining lateral. When removing large tree limbs, a series of three cuts are recommended in order to avoid tearing the bark along the main truck and severely wounding the tree. One undesirable form of thinning is the bench cut, where a vigorous upright limb is thinned to horizontal limb. Vigorous, upright shoot growth result from the “bench” area because of the absence of apical dominance in the horizontal limb. The correct method is to make the thinning cuts to limbs that are similar in angle to the limb being removed but not greater than 45° to 60° from vertical. Shoots or limbs having narrow-angled crotches are weaker than those having wide crotch angles. The bark of the adjoining branches becomes tightly compressed, preventing normal wood development. Winter ice, trapped down in crotches, often causes narrow-angled branches to split.

Healing naturally follows pruning or wounding. It starts in the cambium, a thin layer of cells between the wood and bark. Two areas of the cambium, the bark ridge at the junction of two limbs, and the branch collar, a ring of slightly raised tissue where the lateral branch joins the main limb, function to close off the wound between the plant and the pruning cut. For fastest healing, prune close to the main branch without injuring the bark ridge or branch collar areas. Leaving a stub will slow healing and invite decay. Wound dressings or pruning paint are cosmetic and do little to promote healing of the pruned area.

Time of pruning varies with plant species. Prune at times that best complement the growth characteristics, flowering, and other objectives you desire. Many woody ornamentals are pruned according to their date of flowering. Pruning spring-flowering shrubs during the dormant season will remove flower buds formed the previous fall. Summer-flowering plants generally are pruned during the dormant winter season. If plants are not grown for their flowers, the best time for pruning is during the dormant winter season before new growth begins in the spring. Avoid heavy pruning during the late summer and fall because regrowth may occur and make the plants more susceptible to cold injury. Some plants bleed heavily after pruning, which isn’t usually harmful. Trees subject to bleeding should be pruned in the late spring or early summer when leaves are on the tree. Actively growing leaves tend to reduce the amount of bleeding from pruning cuts and allow the cuts to heal more quickly. Plants that bleed readily include willows, birches, maples, beeches and dogwoods.

Pruning is an invaluable tool for developing and maintaining woody plants. Developing clear pruning objectives is important. By combining these objectives with a basic understanding of pruning and how plants respond, you can derive maximum benefit from the effort.

Acknowledgment is made to Dr. Stephen C. Myers for developing the original manuscript for this publication.

Gale A. Buchanan, Dean and Director