How To Care For St. Augustine in Austin, TX

The combined loss of water from plants and soil was measured in a classic turf study in Central Texas(Table 1). Soils with good water holding capacity provide more water reserve for the roots than sand soils. Turf grown near heat sources use more water, while turf under trees uses less.

Typically, in south Texas soils, St. Augustine has about 3/4 inch total soil moisture reserve. That’s how much water it loses before it wilts. The simplest way to know when the lawn has lost this much water lawn is to watch it wilt. If you notice gray areas which “footprint,” and individual leaf blades that are curled, it’s time to irrigate. Wilting is normally noticed in the late afternoon, and the turf should be watered the following morning. Since irrigation systems are not perfectly tuned to provide 3/4 inch to every corner of the lawn, one would normally water more than this amount. How much depends on how bad the irrigation system is. The simplest way to find out is to place straight sided containers, such as coffee cans or frozen drink concentrate cans, preferably 10 or 20 per lawn, and run the sprinklers for a timed test. If the sprinklers put out 3 inches in one hour, then you can figure on watering for 15 minutes to provide the average turf needs, until the next time it wilts.

Bad irrigation wastes water. The biggest corrupter of irrigation systems is poor sprinkler placement. Generally, the sprinkler heads should be close enough so that the spray or stream from each head just barely touches the neighboring heads. So if your sprinklers are placed on a square grid the arc from each head must touch four other heads. Except along the edges and corners of the landscape, half- and quarter- circle matched precipitation heads would be used so as not to put water on the street or building.

After the first week or so, St. Augustine grass plots suffered 15% loss of canopy per day. Plots which underwent two weeks of wilt were completely dead. Any subsequent recovery was from stolons growing in from the sides. Actual results which you might experience in a lawn will vary according to microenvironment, e.g. Other organisms, such as nematodes, can compromise the root system and make the grass less able to stand up to lack of water. Grass which has been fertilized recently with highly soluble fertilizer often wilts quickly.

Technically, St. Augustine uses only a little more water than other drought avoidant grasses such as Bermuda and Bahia. What probably lends to the severity of drought damage in St. Augustine is the exposure of the horizontal above-ground stems to desiccation. In contrast, Bahia stolons are partially protected by the clasping leaf sheaths. Bermuda and Zoysia grass have much of their stem material below the ground (“rhizomes”), and rhizomes are not only protected from desiccation by the soil, but they tend to be in a semi-dormant condition, thus are more resistant to desiccation. There’s a chance it will rain within a few days from the first wilt, and so generally it’s safe to watch and wait. Wilt is typically noticed at first in the mid-afternoon and the lawn becomes turgid again by the next morning. The progression of afternoon wilt can continue for a week or so, expanding in area and starting earlier in the afternoon. When the lawn still remains wilted the following morning, it is on its death course. Any new growth in grasses must come from the stems. Once the stems have dried, the plant can make no more leaves, roots, or stems. 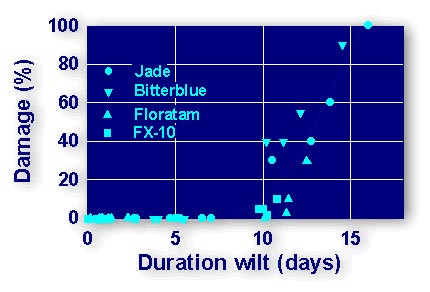 Before mowing, be sure the mower blade is sharp, as a dull blade will bruise and tear the grass tips, and will eventually turn them brown. Mow when the grass is dry to eliminate shredding and whipping of the grass blades. Base the mowing on the growth rate of the grass rather than on a set time schedule and never mow more than 1/3 of the grass blade, so the clippings won’t have to be bagged. Contrary to popular belief, clippings left on the lawn are not a significant contributor to thatch. As the summer progresses and the temperature increases, raise the mower to 2 1/2 to 3 inches. The grass will be stronger and better able to survive drought when it is mowed at a higher cut and it will also discourage germination of weed seeds and insulate the soil against the drying heat. Mow the lawn into the fall until the grass stops growing.

Some thatch is normal and even beneficial, as it acts as a mulch to retain moisture and keep the soil cool. Thatch also discourages germination of weed seeds and as it decays it adds nutrients to the soil. But once thatch accumulates to more than 1/2 inch, it can choke your lawn and invite trouble from disease and insects. A healthy lawn in central Texas will generally not have a thatch problem. Thatch is a tightly intermingled layer of living and dead stems, leaves, and roots, which develops between the layer of green vegetation and the soil surface. To keep the amount of thatch down, the lawn needs better conditions for micro-organisms and decomposition of organic matter. Aeration can be done in the spring or fall of the year to allow for better water and air infiltration, and nutrient mobility. Aeration also improves the physical condition of the soil by relieving compaction and will help with all plant and soil processes, while keeping thatch at a desired level.