Real Green Pest and LawnExpanding, irregular patches of dead or stunted grass surrounded by a halo of yellowing, dying grass often provide the first clue to the presence of chinch bugs. These patches of dying grass tend to increase in size and merge as insect numbers increase. Chinch bug damage can be confused with lawn diseases and other physiological disorders. Brown patch is a common disease affecting the leaf blades of St. Augustine, but usually occurs in a circular or semi-circular pattern, as opposed to the irregular-shaped areas of dead and dying grass that from chinch bugs. Chinch bug damage also can be difficult to distinguish from drought. Detection of significant numbers of the insects themselves is the best proof that chinch bugs are the cause of the damage. 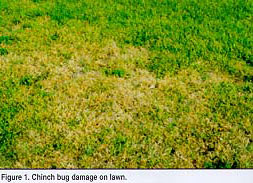 Adult southern chinch bugs are small and slender, 1 /6″ to 1 /5″ long with black bodies and white wings. Each wing has a distinctive, triangular black mark. Normally, some of the adults at any given site will have full-sized, functional wings, whereas other individuals will be short-winged and incapable of flight. Recently hatched immatures are wingless, yellow or pink, with a light-colored band across their backs. After each molt the nymphs more closely resemble the adults. Before the last molt, nymphs are black or brown, and have a white spot and two small wing pads on their backs. Chinch bugs are found most readily in the weakened, yellowing grass around a dead spot in the lawn.

In Texas, adult chinch bugs are inactive during the winter. Reproduction begins with warm weather in the spring. Under optimal conditions, each female can deposit up to 300 eggs, which hatch in 2 weeks. The nymphal stage lasts about 30 days, while the entire life cycle lasts 7 to 8 weeks. This speed of development allows time for three to five chinch bug generations each year. However, as the season progresses generations tend to overlap, with all stages found together. Mouthparts of the southern chinch bug consist of a long, slender beak, which is held close to the midline of the underside of the insect when not feeding. Chinch bug damage is due not just to the direct effects of feeding, but also to phytotoxic effects of the saliva.

Excessive thatch forms when soil microbes are unable to break down dead plant material as fast as it is added. Proper mowing practices can help reduce thatch build up. For optimum turfgrass health, no more than 35 to 40 percent of the leaf blade should be removed at a time when mowing. This means that lawns generally should be mowed no less often than once a week during the growing season. Mulching- or recycling-type mowers tear grass clippings into small pieces that are decomposed more easily by soil microbes. Research has shown that proper use of mulching mowers reduces the need for fertilizers and does not contribute to excessive thatch. When thatch exceeds 1 inch in thickness, it may be necessary to have your lawn “vertically mowed.” Vertical mowing can temporarily harm your lawn’s appearance because it destroys the tightly woven stolon system of St. Augustine.

Lawn aeration with top-dressing also can help reduce thick layers of thatch. Aeration is performed by punching holes in the turf to increase air and water penetration. Lawn aeration machines can be obtained from many equipment rental stores, or aeration can be performed by a professional lawn care company. Aeration, in combination with top-dressing, helps correct moderate thatch problems by increasing soil-to-thatch contact, thus speeding up microbial decay. Too little or too much water also can cause chinch bug problems. St. Augustine lawns should be watched closely during the summer for signs of drought stress. The lawn should be watered immediately when edges of grass blades begin to curl, grass fails to spring back quickly when walked on, or the turf takes on a dull bluish-gray color. Due to the variety of soil types and depths in Texas, the amount of water needed will vary.

The most commonly planted St. Augustine-grass varieties are highly susceptible to chinch bug attack; however, research has identified several resistant types. The varieties ‘Floratam’, ‘Floralawn’, and ‘Floratine’ show varying degrees of resistance to feeding by chinch bugs. ‘Floratam’, however, is the only variety that is commonly sold in Texas. ‘Floratam’ generally provides a high level of resistance to both chinch bugs and St. Augustine Decline (SAD), a viral disease; however, it should be planted only in the southern half of the Texas because of it lacks cold-hardiness.

Chinch bugs are attacked by many predatory insects, such as big-eyed bugs, minute pirate bugs, and ants. Repeated insecticide applications can reduce populations of beneficial organisms and actually lead to increased chinch bug numbers. To preserve beneficial insects, apply insecticides only when necessary. 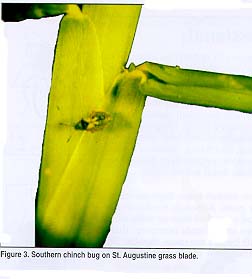 New varieties of insect-pathogenic fungi are currently being selected and tested for chinch bug control. Beauveria bassiana is one such fungus that has shown potential for control of many pests. Currently, however, there are no consistently effective fungal controls for chinch bug. Likewise, beneficial nematodes have provided inconsistent results when used against chinch bugs. For homeowners who want to avoid the use of any chemicals on their lawn, these products may provide some measure of control.

Good water and fertility management, thatch control, and use of resistant grass varieties dramatically reduce the need for insecticides to control chinch bugs. However, when dead and dying zones in turf-grass are accompanied by the presence of chinch bugs, some corrective action is needed. Chemical insecticides, when used according to label directions, can provide a rapid reduction in chinch bug numbers.

The first step when using pesticides for chinch bug control is to determine whether a problem truly exists. If your neighborhood is prone to chinch bug problems, inspect your lawn weekly during the spring, summer and fall. Look for off-color areas, especially in direct sun, and along sidewalks and driveways. When chinch bugs are present in high enough numbers to cause grass to yellow, they can often be found by parting the grass at the edge of affected areas and examining the soil and base of the turf. With heavy infestations, chinch bugs may be seen on leaves or on adjacent sidewalks on hot days.

When chinch bugs are abundant enough to cause visible damage, insecticide use can prevent further injury. A variety of liquid and granular insecticides is available to control chinch bugs. Granular insecticides can be applied with a standard fertilizer spreader and irrigated lightly ( 1 /8″ to 1 /4″ water) to activate the insecticide. Drop-type spreaders are recommended to avoid scattering insecticide granules into gutters, sidewalks and driveways, where the granules can be washed into storm drains and streams. Any granules landing in such sites should be swept up and reapplied properly. Liquid sprays are usually applied using a hose-end sprayer that can apply 15 to 20 gallons of water per 1,000 square feet. Watering the lawn before application can help the pesticide penetrate the turf.

In cases where chinch bugs are restricted to isolated areas of the lawn, use spot treatments. Treat the off-color turf and all surrounding infested areas. Inspect the site every 3 to 5 days for at least 2 weeks to determine if the infestation is under control. Spot treatments minimize the impact of pesticides on beneficials and help avoid environmental contamination. Products containing diazinon, chlorpyrifos (Dursban®), or acephate (Orthene®) are suggested for homeowner applications. Chinch bugs have been reported with resistance to the above products in some areas of Florida; however, this has not been apparent in Texas. Where any of these products fail to provide control, apply a synthetic pyrethroid such as permethrin (e.g., Spectracide® Liquid Insecticide Spray).

Always wear appropriate clothing when applying pesticides. Read the label to see what protective equipment should be worn. Minimal protective clothing includes long pants, shirt, shoes and socks. Unlined, chemical-resistant gloves are recommended whenever mixing liquid pesticides. Treated areas should be allowed to dry thoroughly before permitting people or pets to walk on the treated grass. Always check the label for information concerning safe re-entry times. Some communities in Texas experience periodic sewage contamination due to improper pesticide use and disposal. Check label directions for special instructions on disposal of empty containers. Never dispose of unused pesticides down storm sewers, toilets, or sinks. This pollutes the environment and can result in costly cleanups for your community. Clean up pesticide spills immediately. Should any pesticide threaten to enter a storm drain, stream, or lake, call the Texas State Environmental Emergency Response Hotline at 1-800-832-8224.